TAKING STEPS: Things You Must Know to Achieve Your Goals 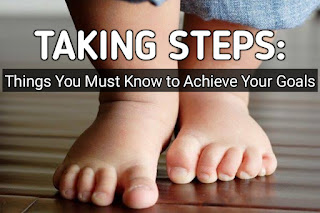 Life's First Steps Intense pleasure perfumes the robust mother’s face as she eagerly encourages her son with her beckoning hands. The 100cm-space between the mother and her son was premeditated; just enough for the kid to bridge in the first real assignment for his feet.
‘Will he, will he not?’ the question pounds the mother’s heart.
A minute and a half of beckoning, and plenty ‘Come to mummy,’ then it happens. With outstretched arms like a tightrope walker, the son takes his first shaky step. In the recent past, he had taken such first steps only to return to the lotus position on the ground. The second stride is what counts.
‘Will he weather the storm this time around?’ the Mama looks on with the keenest of interest.
Presently, he struggles with balance and after a while he finds his feet. His right leg rises in the air and lands, the second step. The mother’s heart pumps blood in pints. She unconsciously etches the finish line by an inch or two in exultant restlessness. The oth…
2 comments
Read more

SAY IT: That Little Word of Appreciation Can Go A Long Way 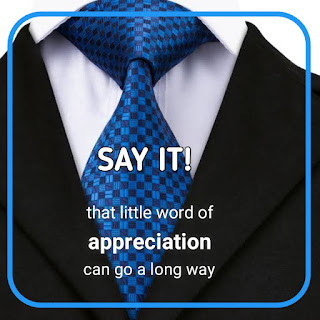 I myself appreciated the tie when it was extended to me by my sister-in-law. She and her husband had gone overseas and had bought this seven-pound-something-shilling neck ornament. It has glistering sky blue woolly squares on deep blue background. I carried my neck with grace on the two occasions I had worn it. This is its third outing.
I had had a mild running stomach. I had met a dead ATM on my attempt to withdraw money. And on top of it all, I had had to frantically struggle to maintain my calm at the roadside for twenty minutes or thereabout waving and barking down the taxi that would go my route. Now in the front seat of the destined cab cooling off, I got stuck in a traffic jam.
“Haven’t I had enough troubles,” I thought.
Then an extrovertish man, just coming down from his parked car, looked over the cab’s window at my treasured tie,
“I like your tie. It’s beautiful!” he opined. “Thank you every much. Thank you very much.” I was all smiles.
And the aftereffect of the timely com…
2 comments
Reactions:
Read more

THE DAY I ALMOST DIED: my main concerns in the fleeting moment 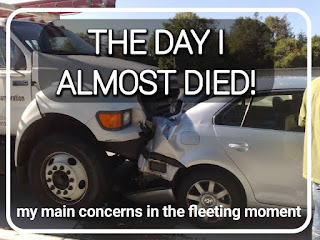 …Then, a shout of wailing Now, an eternal serenity For man forgets too soon The memory of the late…

The date was 25th of July, 2015. That date was remarkable too. It was the eve of the first birthday of my long-awaited son – our marriage waited without child seven years. I had boarded a car conveying me to my Ijebu-Ode base from work. A light shower had covered up a pothole at the foot of the sloppy section of the Sagamu-Ijebu-Ode Expressway near Babcock. Our cab fell into it and the ignition went off. Before the driver could struggle it out we got hit from behind by a galloping articulated truck. Viola! Our car got on the run, out of control of the driver, heading for disaster. We all in stunned silence sorrowfully waited where this evil momentum would land us.
At that moment I was not thinking of my wife or my son’s approaching birthday. I was not thinking of my church members or my work colleagues. I was not thinking of my relatives or fond friends. As the car co…
2 comments
Reactions:
Read more

THE LAST EMPIRE DAY: When The Swift Almost Lost Out 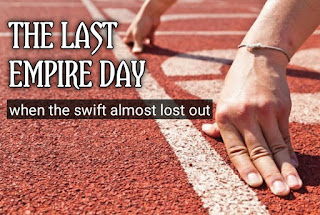 #pastorbiodunsoretire
https://m.facebook.com/story.php?story_fbid=123349462750120&id=106045277813872
Concerning athletics, I was an all-rounder. Track or field event, I traversed all like the great Colossus of Rhodes. Not only that, when the events were eight, my own would be sixteen because I would run for both the junior and senior categories. I had one nickname that time – “Ehoro!” (Hare).
It was during 1957’s Empire Day. We were about to start the 400-yard race.
“On your mark!”
We crouched behind our lines.
“Agbeke...”
My name filtered from the crowd behind. There must be something sinister about this.
At the annual inter-school Empire Day, the competition was always intense, both on and outside the field. Teachers from other village schools would often call to the officials to have my favoured height checked, cross-checked and double-checked. And the result was always the same:
“She could run in both categories”.
And pupils of these other schools were not left out of the fie…
Post a Comment
Reactions:
Read more
More posts